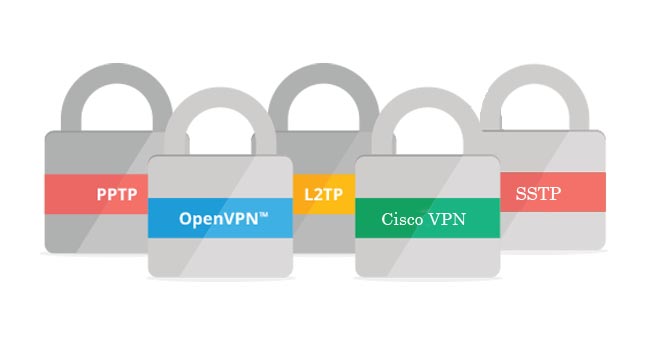 One of types of protocols of VPN is PPTP, PPTP VPN service – Point to Point Tunneling Protocol is a method for implementing virtual private networks. PPTP service uses a control channel over TCP and a GRE tunnel operating to encapsulate PPP packets.

The PPTP service specification does not describe encryption or authentication features and relies on the Point-to-Point Protocol being tunneled to implement security functionality. However the most common PPTP implementation, shipping with the Microsoft Windows product families, implements various levels of authentication and encryption natively as standard features of the Windows PPTP stack. The intended use of this protocol is to provide security levels and remote access levels comparable with typical VPN products.

By using PPTP, a large organization with distributed offices can create a large local area network (LAN ) – essentially a VPN – by using the infrastructure of a wide area network (WAN), like the network of a public Internet service provider (ISP) or telecom. This is more cost effective than laying out a network infrastructure over such distances.

The entire L2TP packet, including payload and L2TP header, is sent within a User Datagram Protocol (UDP) datagram. It is common to carry PPP sessions within an L2TP tunnel. L2TP does not provide confidentiality or strong authentication by itself. IPsec is often used to secure L2TP packets by providing confidentiality, authentication and integrity. The combination of these two protocols is generally known as L2TP/IPsec (discussed below).

People connect to the Internet from several public locations, such as airports and cafes, they had no acceptable use policy enforcement, minimal protection against malware, and are at a higher risk of data loss.Cisco offers AnyConnect Secure Mobility to extend the network perimeter to remote endpoints, enabling the seamless integration of web filtering services offered by the Web Security appliance.

When researching security options that are available from Cisco, one of the words that is hard to miss is AnyConnect. Cisco has developed the AnyConnect Secure Mobility Client as a “next generation” Virtual Private Network (VPN) client. AnyConnect is not limited to providing VPN access, it has a number of other capabilities that enable an enterprise to truly secure the endpoint.

Cisco anyconnect VPN client provides the remote access connectivity portion of AnyConnect Secure Mobility.The connection is secure because both the user and device must be authenticated and validated prior to being provided access to the network.When a user opens a VPN session using Cisco AnyConnect, the AnyConnect client connects to the adaptive security appliance using SSL. The client authenticates with the adaptive security appliance and is assigned an internal IP address on the network.

How does cisco anyconnect vpn work?

You can see how to setup Cisco anyconnect vpn client on your computer and smartphone :

What is OpenVPN Service?

OpenVPN is an open-source software application that implements virtual private network (VPN) techniques for creating secure point-to-point or site-to-site connections in routed or bridged configurations and remote access facilities. It uses a custom security protocol[2] that utilizes SSL/TLS for key exchange. It is capable of traversing network address translators (NATs) and firewalls. It was written by James Yonan and is published under the GNU General Public License (GPL).
OpenVPN allows peers to authenticate each other using a pre-shared secret key, certificates, or username/password. When used in a multiclient-server configuration, it allows the server to release an authentication certificate for every client, using signature and Certificate authority. It uses the OpenSSL encryption library extensively, as well as the SSLv3/TLSv1 protocol, and contains many security and control features.

Another types of protocols of VPN is SSTP , Secure Socket Tunneling Protocol (SSTP) is a form of VPN tunnel that provides a mechanism to transport PPP or L2TP traffic through an SSL 3.0 channel. SSL provides transport-level security with key-negotiation, encryption and traffic integrity checking. The use of SSL over TCP port 443 allows SSTP to pass through virtually all firewalls and proxy servers except for authenticated web proxies.
SSTP servers must be authenticated during the SSL phase. SSTP clients can optionally be authenticated during the SSL phase, and must be authenticated in the PPP phase. The use of PPP allows support for common authentication methods, such as EAP-TLS and MS-CHAP.